Get up to 30% off scrubs and more | Access Discounts 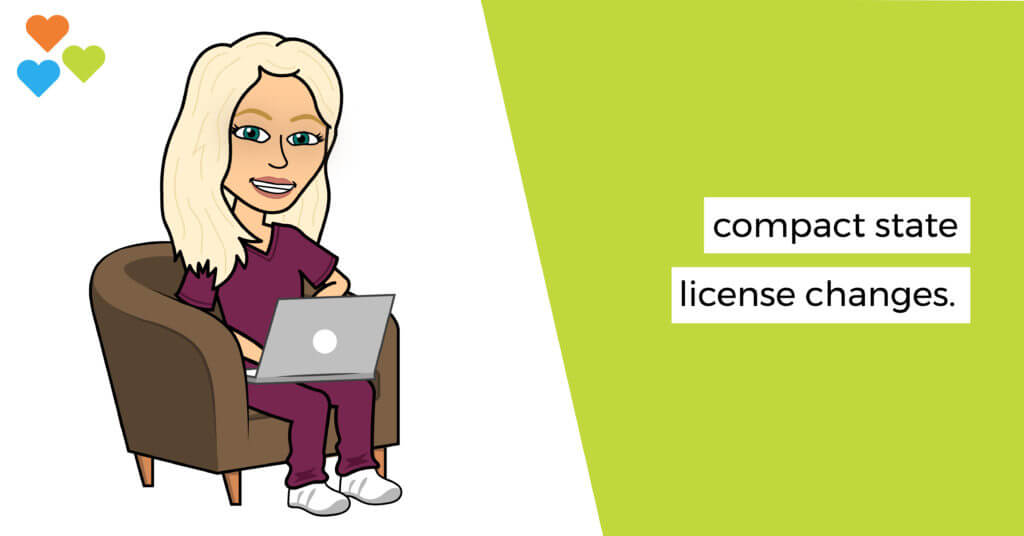 This post was originally published on Nov. 8, 2017. It has been updated (Jan. 29, 2018) to reflect the signing of Colorado SB 18-027 and New Mexico Senate Bill 1 into law, enacting Colorado and New Mexico as the newest eNLC member states.

In 2015, the Boards of Nursing revised the Nurse Licensure Compact. These updates created the Enhanced NLC, and was officially implemented on Jan. 19, 2018. Licensed in an NLC state that adopted the eNLC framework on July 20, 2017? Your multi-state license should roll over to an the eNLC on Jan. 19, 2018. Here’s what travel nurses should know about compact state license changes.

Not every state in the original NLC is on board with the eNLC, looking at you Rhode Island. If you are a travel nurse and hold a license in RI, there will no longer be travel to compact states without additional licensure (and vice versa). Five states that weren’t part of the original NLC have joined the eNLC. Florida, Georgia, Oklahoma, West Virginia, and Wyoming are new eNLC members. Welcome! Illinois, Indiana, Kansas, Michigan, Massachusetts, New Jersey, and Vermont have pending legislation to allow their states to the list.

Multi-State License and Your Home State has Joined the eNLC

If you had a compact state license under the original NLC compact and your home state has joined the eNLC, you are grandfathered into the eNLC. You can travel to and work in any other eNLC state without additional licensure requirements. What does this mean? Home state is currently North Carolina AND you held a multi-state license, you can now work in Maryland, West Virginia, or Florida! Bring on the sunshine. Keep in mind, if you move your permanent residency from North Carolina to Maryland (or any other eNLC state), you’ll need to obtain a license to practice in that state plus meet the Uniform Licensure Requirements (ULR) for a compact state license.

Now, if you live in Florida (which just entered the eNLC and was not an NLC member) you will be starting from scratch. A journey but worth it if you are ready to travel. You must apply through your state Board of Nursing, pay a fee (varies by state), and meet the ULR.

What is the ULR?

The ULR, or Uniform License Requirement, is a set of 11 requirements that fall into three categories. These buckets can broadly be described as: qualifications, track record, and work eligibility. Also included qualifications are suitable education, passing an NCLEX or predecessor exam, English proficiency, and meeting the licensure requirements in your home state. The background qualifications include not having active disciplinary actions on your license, no felony or nursing-related misdemeanor convictions, no current participation in alternative programs, and undergoing fingerprint screening. Work eligibility will require having a valid Social Security number.

If you live in a state that’s new to the eNLC, you’ll receive a notification from your state Board of Nursing outlining the steps to take in order to begin practicing in other states. Applications should be available online now.

Diving into the Details

Find the Travel Job that’s Right for You

Interested in how the pay stacks up in other states not on this list? Our trusty Super Nurse sidekicks are standing by to answer any questions you have. Click below to get information on opportunities in other states!

Go To Job Board Now

How to Be the Best Travel Nurse For Your Recruiter

Why Do Travel Nurses Need Recruiters?

Thank you! Your submission has been received!
Oops! Something went wrong while submitting the form.